Does it Matter if it is “Black Mold” or Mold that is Black? 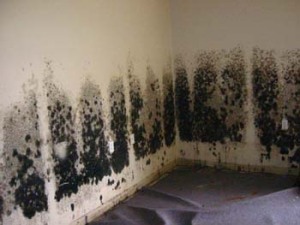 While some mold investigators avoid taking a position on this question, I strongly believe that the existence of the slimy black mold, Stachybotrys, is of greater concern than most other black colored molds.

My office is flooded with frantic phone calls whenever headlines such as “Killer Black Mold Closes School,” or “Deadly Black Mold Forces Evacuation of Court House,”  hit the press.  For the most part, the dangerous “black mold” in the media was Stachybotrys. Some of the calls our office receives raise strong concerns regarding exposure hazards from large areas of black colored mold on drywall and other water damaged building materials.  I am much less concerned when callers report black mildew on bathtub grout.

The hazards of the toxigenic black mold, Stachybotrys, have been debated in the legal and medical communities for more than a decade.  The controversy over “black mold” gained momentum around 1994 when a physician attributed a cluster of infant deaths near Cleveland Ohio to hemosiderosis (bleeding from the brain) as a consequence of exposure to toxins produced by the black mold Stachybotrys chartarum.  Initially, the Centers for Disease control and other entities, including the New York City Department of Health, issued strong warnings about this slimy black mold.  Ultimately, the CDC stated that although Stachybotrys and some other molds were known to produce toxins, they did not believe sufficient evidence existed to link the mold with the infant deaths.

Many reputable physicians and toxicologists strongly support the contention that toxins produced from Stachybotrys can cause various multi-system disorders, including cognitive impairment, chronic fatigue, immune suppression, and gastrointestinal disorders.   There are an equal number of doctors who discount the toxigenic effects of mold.

As an investigator, my focus is on diagnosing buildings, not people.  However, to effectively and ethically practice my professional, an understanding of the potential health effects of mold exposure is essential.  Questions regarding health symptoms are part of Sanit-Air’s mold investigations.  Allergic reactions are the most common symptoms reported from individuals with exposure to common black colored molds such as Alternaria and Cladosporium.  However, when the health complaints include chronic fatigue, muscle aches, fibromyalgia, gastrointestinal disorders, tremors, memory fog, and immune suppression, Stachybotrys chartarum is almost always found within the indoor environment.